The Club is proud to be entering its seventh decade, having originally been formed in 1948.

Little hockey was played prior to this when the then local club played as East Herts HC. Home games were played at Cricketfield Lane, Hockerill Athletic Club and Sawbridgeworth. Barely able to raise a team in the early days, players had to rely all too often on getting to away fixtures by train and taxi due to the lack of motorcars after the war.

Later successes include the integration of the Ladies Hockey Club and our pitch partnership with Hockerill Anglo European College.

The Club now boasts 10 teams, including 5 ladies sides, 5 mens sides, as well as indoor and mixed, in addition to our thriving colts and junior sections.

A note on the club history

Colin Barber commissioned Tom Saul to produce his recollections of the early years of BSHC reproduced here along with his own manuscript of the middle years of the club’s history to date. His son, Duncan, our current Men’s Club Captain arranged for these manuscripts to be transcribed in 2017 and Mark Surridge added his section to bring the history up to the end of the 1980s. Click here to read the draft so far! 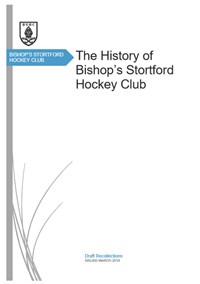 We are now seeking help from members and friends of the club to build on the bones of this history: either to add their recollections to enhance the existing sections or to contribute to more recent history – particularly the period 1990-2010 and to reflect the enormous contirbution of the Ladies' section in this history. We are also keen to receive any photos, scanned or otherwise, and any other memorabilia worthy of capturing in this document.

We what to ensure all our members receive the best experience whilst at Stortford Hockey Club, your feedback is so important to us as it can help us improve our club. We would love it if you could take a moment to leave us a review on Facebook or Google?

This can be done by clicking on the below links:

Contact us today if you are interested in finding out more about our club either as a player, official, coach or volunteer.

Details of Data Controller are